4 Factors That Determine the Price of Gold Former Federal Reserve Chairman Ben Bernanke famously told Congress that, “nobody really understands gold prices, and I don’t pretend to really understand them either.” (Bloomberg) So if one of the most revered financial experts of our times can acknowledge such befuddlement, the rest of us need not be so hard on ourselves. Predicting the short term direction of gold may be challenging, but there are a handful of drivers that are affecting the price of gold that provide a baseline understanding, important for anyone interested in buying gold as an investment.

Experts agree there are roughly 120,000 - 150,000 tonnes of gold above ground and that most of the gold ever mined still exists. Even though annually about another 3,200 tons of gold are mined according to the World Gold Council, a huge amount of gold is recycled every year to help meet demand. Most of the produced gold is consumed by the retail industry for jewelry or industrial/dental purposes. The remainder goes to investment products such as bullion coins or gold Exchange Traded Funds with Central Banks being a large purchaser of the physical metal. That’s important to understand because supply and demand is a major driver of the price of gold.

The question then becomes, what else impacts demand and the price of gold? That’s a bit more complicated. Let’s take a look at a few of the major factors:

Value of the U.S. Dollar

Countries’ central banks oversee monetary policy and currency, control money supply, set interest rates and attempt to manage inflation. Historically, many western countries tied their currency to gold, however most economic scholars agree these efforts largely failed. Yet today, central banks or countries – including the US - continue to hold large gold reserves. In fact, the US has the largest gold reserves at over 8,000 tonnes.

Why do they still buy gold? Largely because it acts as a hedge against the US dollar as they have an inverse relationship. Holding physical gold also strengthens a nation’s currency because it has a tangible asset tied to its currency. China and Russia have been significant buyers recently and as the nearby chart from the International Monetary Fund and Bloomberg illustrates, countries have been on a buying spree since the financial crisis. 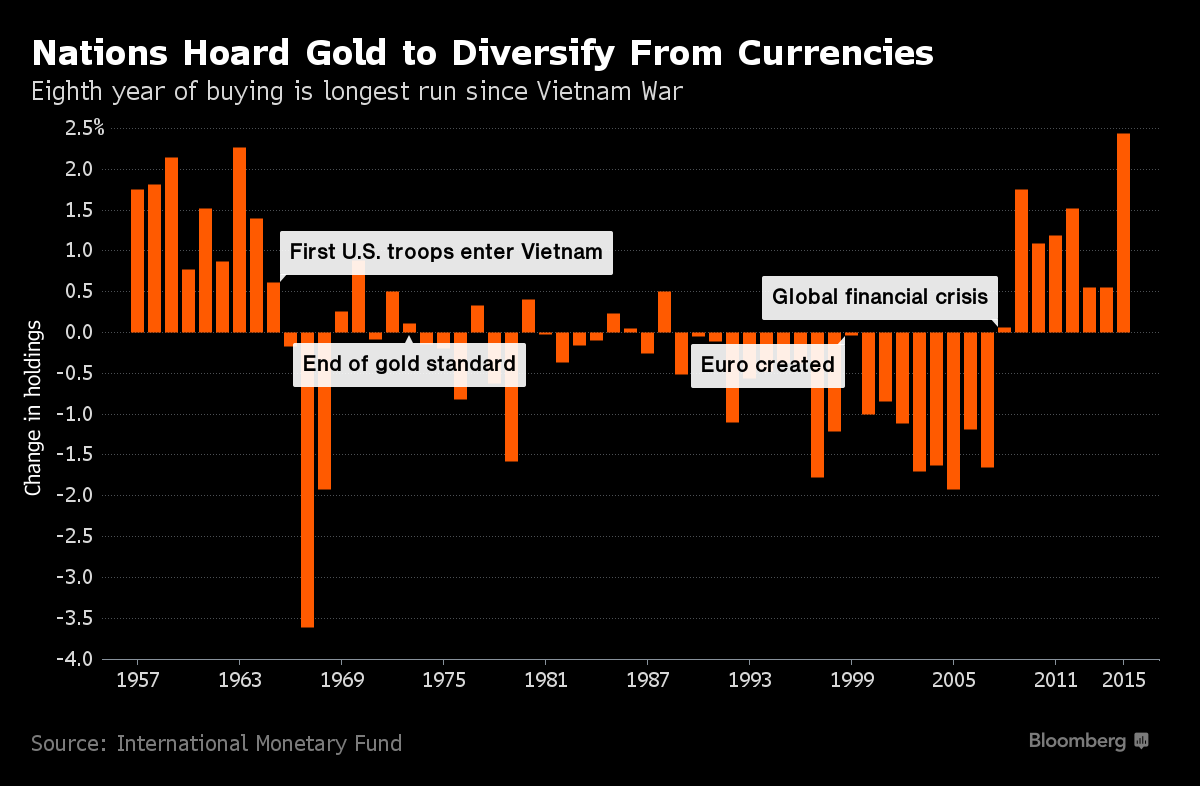 Countries – and savvy investors - also buy gold because of concerns over inflation since gold has historically proven to be an effective hedge against inflation. Market studies have revealed that inflation is one of the leading indicators to predict the price of gold. Think of this as the buying power of a dollar. The buying power of gold has remained strong compared to the weakening dollar over the last 40 years.

Gold has excellent thermal and electrical conductivity properties which has resulted in it being used for various industrial purposes. Additionally, because of its resistance to corrosion and bacterial colonization it is used in the medical field.

Understanding these drivers will help investors better grasp the fluctuations of gold pricing and its role in a diversified portfolio. Financial advisors recommend that physical gold and silver represent a portion of one’s investable assets because it can serve as a hedge when other investments move out of favor. While everyone would like to buy low and sell high, precious metals are meant to be a longer term buy and hold strategy. For reasons outlined in this article, the drivers of the price of gold are many and aren’t a guarantee for knowing when it’s the best time to purchase or sell.

Information contained within Lear Capital sites and publications is for general educational purposes and should not be construed as investment advice. Lear Capital does not provide legal or tax advice, or retirement-specific recommendations.
© 2022 LEARCAPITAL.COM. ALL RIGHTS RESERVED.
Terms & Conditions Copyright
×