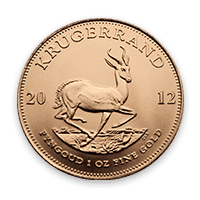 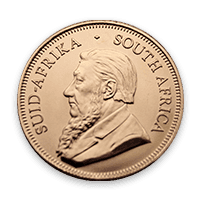 About The krugerrand Coins

History of the Krugerrand

The name itself is a compound of "Kruger" and "rand", the South African unit of currency. Paul Kruger, the man depicted on the obverse of the coin, was one of the dominant political and military figures in 19th-century South Africa, and President of the South African Republic (or Transvaal) from 1883 to 1900.

Between Executive Order 6102 and the Trading with the Enemy Act of 1917, American citizens were effectively banned from owning gold bullion. They could however, own foreign coins. The South Africans cleverly made the Kruger legal tender, and also stamped the weight on the Krugerrand, making it easy to trade known quantities of gold without having to melt and assay the gold. This allowed Americans to legally own gold Krugerrand coins, however it was illegal to import them until the South African government ended Apartheid and western sanctions were removed in the mid-90s.

Production levels of the Krugerrand coins have significantly varied over the last 50 years. From 1967-1969, approximately 40,000 coins were minted each year. In 1970, the amount of minted coins increased to over 200,000. Over one million coins were produced in 1974 and in 1978 a total of six million Krugerrand gold coins were produced. Following the end of apartheid, the production dropped to 23,277 coins in 1998 and since then levels have increased again, albeit not reaching pre-international sanction levels.

The reverse of the gold Krugerrand 1 oz coin features a Springbok antelope. The artist, Coert Steynberg, was a talented sculptor in South Africa, who became well known for creating the statue of Paul Kruger in the largest game preserve in South Africa, Kruger National Park. Otto Schultz is responsible for the obverse of the Krugerrand coin, a side profile of Paul Kruger.

Why Invest in the Krugerrand?

These are troubled times and gold has historically been the ultimate hedge against economic volatility and crisis. IRA accounts are traditionally dependent upon a select group of stocks, bond and/or mutual funds which are inextricably linked to the economy. And when the economy suffers, the value of many IRA accounts begins to plunge. Gold on the other hand has outperformed the Dow by over 300% over the past decade which begs the question ... why wouldn't you protect a portion of your retirement and secure your accumulated savings by adding a gold Krugerrand 1 oz coin?

For centuries, investors and collectors have owned physical gold, including the Krugerrand gold coin, for a variety of reasons. Gold is: